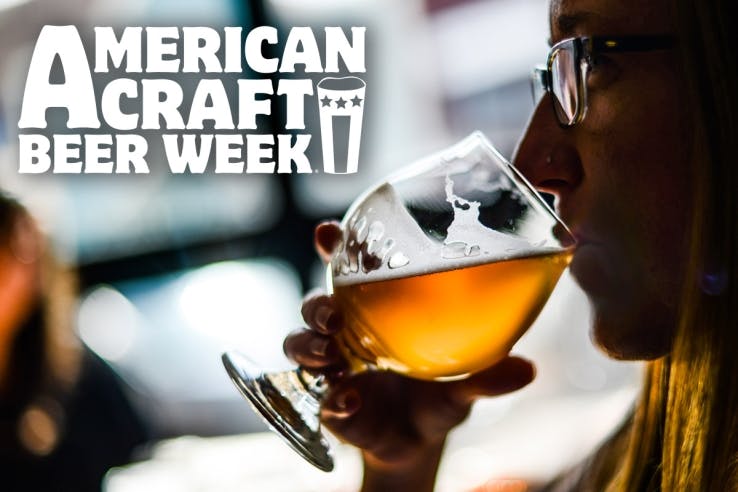 “From May 15 – 21, all 50 states will be holding events including exclusive brewery tours, special beer releases, beer and food pairings, tap takeovers and more to celebrate everything you love about America’s ever-advancing beer culture.” Learn more about the American Craft Beer Week here.

The Bulldog Uptown is taping the latest from Abita Beer, the Mint Julep Pale Ale, and serving it alongside some homemade Mint Julep ice cream! Come try some of this sweet treat and this awesome new beer.

NOLA Brewing officially releases Syncopation IPA. This IPA is well worth the hype. NOLA Brewing started a new IPA series and has released 6 batches thus far as a tap only release.

The names of the IPAs have been 001 IPA through 006 IPA. Each recipe has been tweaked slightly and all of them have been off the charts good. The Syncopation is a culmination of NOLA Brewing’s efforts.  From NOLA Brewing’s Founder Kirk Coco:

We have been working on this new recipe for over a year now and we are really excited to release this new IPA into the market. While we are constantly releasing new beers in the tap room and as lagniappes, this is the first beer in a long time that we will have on rotation throughout the year.

The Syncopation is going to be the final product. We can’t wait to try it!

The good folks at Bayou Teche will be at Cooter Brown’s. These guys have been releasing some really nice beers lately including their Giant Hop for Mankind. They will be showcasing this beer among others and pairing them with whiskey as well.

Brieux Carre Brewing also releases 3 new IPAs on Monday. The Hoppy Trinity, 8X Dry-Hopped Falcon Warrior, and StarGazer for all the NE hopheads (pictured left to right below). Head to the Brewery now before they sell-out!

Ashley from Oskar Blues will be giving away lots of goodies including Beer Slings, Shirts, Hats, Stickers, and more! All you gotta do is buy a Oskar Blues Beer and you get a raffle ticket. Go ahead, buy ten Oskar Blues Beers and get ten tickets. You need this stuff.

The Bulldog in Mid-City will have three different types of swine (praline bacon, peppered bacon and pancetta) to pair with The Bulldog’s 61 beers on tap.

Freret Beer Room is partnering with Bayou Teche Brewery to create a unique Cajun-inspired beer dinner! The brewers from Bayou Teche will be there to enjoy and talk about their beers with all of you. This private event will take place on a Tuesday night when they are normally closed, so get your ticket today to reserve your spot.  The cost is $59.11 per ticket after taxes and fees and includes a 5-course dinner with a beer for each pairing.

Here’s what to expect:

Course 4: A Giant Hop for Mankind with braised smoked beef brisket and spetzel.

Choose (7) four-ounce pours for $25 + tax at the Avenue Pub. The taplist looks legit.

Wayward Owl will be releasing multiple small batch beers in celebration! All other tasting room beer standards and current specialties will remain on tap.

+1 Gaming & Second Line Brewing have partnered to put on a board game night at Second Line’s Beer Garden! They will have several demo games to teach and play for free, and games for sale or rent. You’re welcome to bring your favorites to play, too!

Second Line Brewing will have a range of beers on their menu to choose from, including Batture Blonde Ale, India Pale Ale, Route 47 Red IPA, A Saison Named Desire, and their Russian Imperial Stout, plus the Bonafried chicken sandwich food truck.

NOLA Brewing is back with all their newest beers on tap. Enjoy the following being tapped at Cooter Brown’s on May 17th: Double Dry Hopped Hurricane Saison, Rubix Cubism (a new funky offering), Syncopation IPA, and some Dry Hopped Lowerline for good measure.

Trivia starts at 8 pm, so enjoy some beers and play a game.

The Bulldog Mid-City hosts a variety of sours.

Starting on Wednesday, May 17th, Brieux Carre Brewing will be holding Klask tournaments at the brewery! They will have several game tables set up in the beer garden! It will be single elimination with the champion receiving a Free pint glass with 4 FREE FILLS of their choice! There are no teams in Klask. It is pure animalistic 1 on 1 battle!

So what is Klask?

Klask is a Danish board game using magnetics to hit a small ball back and forth to score against your opponent. That’s the main gist! Full rules will be  posted in the event.

The Avenue Pub once again comes through with a clutch sour lineup for ACBW. For $20 plus tax, choose (6) four ounce drafts from your choice below:

Some phenomenal sours in that lineup.

The man himself, Damian Brügger, will be serving a 5-course dinner in the beer garden during American Craft Beer Week. Each course will be paired with a Brieux Carré beer.

$60 gets you food, beer, and good times! Tickets available to purchase in the link above.

To let everyone spread out during dinner, this event is limited to 25 tickets!

Join 40 Arpent Brewing as they hoist a pint to help the Conservation and Restoration of SouLouisiana’snas Vanishing Coast Line. They will have great food and beer as well as a quest speaker Bren Hasse of Coastal Protection & Restoration Authority. This event is free and open to the public.

Purchase all your to-go needs at the source starting at 11AM.

Beignets & Beer at the Bulldog Mid-City

Try out Bulldog’s classic crawfish ettouffe or cinnamon beignets to pair with the 61 beers on tap.

The famous brewery a short drive south of Austin, Texas will be taking over the taplines at Avenue Pub on Thursday, May 18th.

Hopheads Unite at the Bulldog Mid-City

Local’s Night at The Avenue Pub

A similar event from Monday takes place at Cooter Brown’s on Friday. Chef Preston from Abita is whipping up something–ice cream infused with the flavors of a Mint Julep. Mint? Check! Bourbon? Check. Delicious? Double check!

They will also have Abita’s Bourbon Street Mint Julep Stout on tap.

If you aren’t feeling the Mint Julep, Cooter Brown’s will have several other Abita beers on tap as well.

Cease to Love is back and better than ever! After 6 months in bourbon barrels, this Imperial Stout was infused with toasted coconut to make this delicious, limited release beer!

Come join Second Line Brewing this Saturday, May 20th, where they will have Cease to Love on tap at the brewery and 22 oz bombers will be available for purchase.

Saigon Slim’s Food Truck will be here all day and Daria & The Hip Drops will be performing at 7:30 with their Carribean-inspired funk music.

In this monthly event, Urban South likes to showcase a mix of visual artists, designers, photographers, and other entrepreneurs and creators in a comfortable vending and mingling environment.
Free Sounds By DJ FTK

Cocoa & Cream Food Truck will be on site.

The culimination of American Craft Beer Week at the best craft beer bar in the city, Avenue Pub.

That’s it for AMCB 2017! Enjoy your craft beer week, whatever it may be!