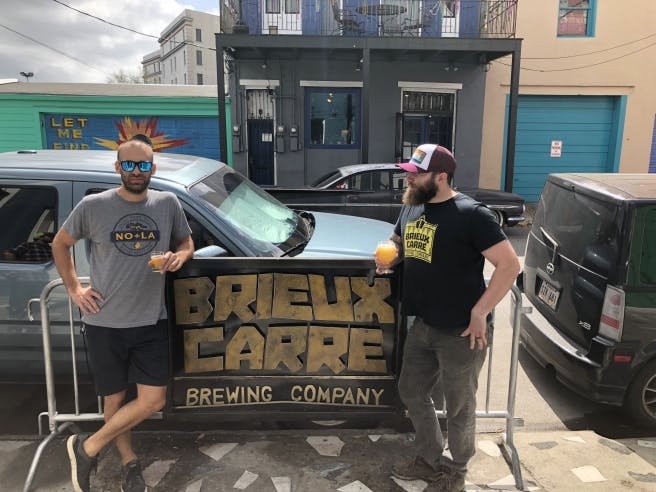 BeerAdvocate, a respected craft beer editor among aficionados, ranked the top 50 breweries to open out of the 997 that manifested their first pours in 2017.

A big congratulations to two local breweries, Brieux Carre & Parleaux Beer Lab for making the cut. And both deservedly so.

“Since 2011 we’ve tracked the rapid growth of the craft brewing industry in the United States, documenting the early successes of beer entrepreneurs from Arizona to Vermont. To help us build our annual feature on brewery openings, we reach out to our writers, subscribers, and followers for their suggestions. This year’s list is bigger than ever, and, for the first time, we’ve included a number of Canadian breweries. Here are 50 of the most promising newcomers, as chosen by you.”

Brieux Carre just turned 1, and they have settled in really well among locals and visitors in the Marigny’s only brewery. Robert Bostik, owner, dove head first into the Haze Craze, and they are now consistently putting out a new Hazy IPA every month.

Our favorites are Dad Jokes & Trust Me, It’s Worth the Parking. Don’t listen to us, check out our customers who had to make a second trip back to the brewery!

Here’s what BeerAdvocate had to say:

This shotgun-style taproom is only a stone’s throw from dozens of music clubs and bars on Frenchmen Street. Combining a prime foot traffic location with New Orleans’ liberal open container laws results in brisk go-cup sales of Wookie Sounds, a hoppy Saison, and Lullaby for a Hobbit, a New England-style IPA. Those who stay can chill out in the backyard beer garden (inside is insanely tiny) and enjoy a wide variety of beer styles. “We’re in a unique era of beer where craft beer drinkers are talking beer politics and taking what they consume very seriously. Maybe too seriously,” owner Robert Bostick says. “Now that we have a team dedicated to creating and always improving upon quality beer, 2018 will be dedicated to us letting our goofy, sarcastic, dry humor fly free.” NORA MCGUNNIGLE

Parleaux Beer Lab turns 1 officially in June, but they came out the gates swinging. Parleaux is the only brewery currently servicing the hipster-friendly Bywater and both locals and tourists alike have flocked to see what their scenic outdoor space has available.

They’ve been hitting homeruns with beer using their own garden. For instance, the Just Juicin’ Gose, a new style of beer that has been killing it lately in the Big Easy:

Here’s what the BeerAdvocate had to say:

Eric and Leah Jensen built Parleaux (roughly translated as “by the water”) Beer Lab to bring fun and creative beer to New Orleans, and a community space to its Bywater neighborhood. “Breweries bring a cool element to a neighborhood,” Eric Jensen says. “We’re producing something awesome while providing a space for customers and families to congregate.” Parleaux’s backyard is a wide expanse of DIY furniture, green space, and fruit trees. The citrus on the trees is used in smaller batches of barrel-aged beer, while the brewery garden provides herbs for beers such as Lemony Sippet Lemongrass Lager. Jensen hopes to develop his barrel program even further in 2018 (though he’s not sure where all the barrels will be stored in the small space).

We look forward to seeing great things from these two breweries for years to come!