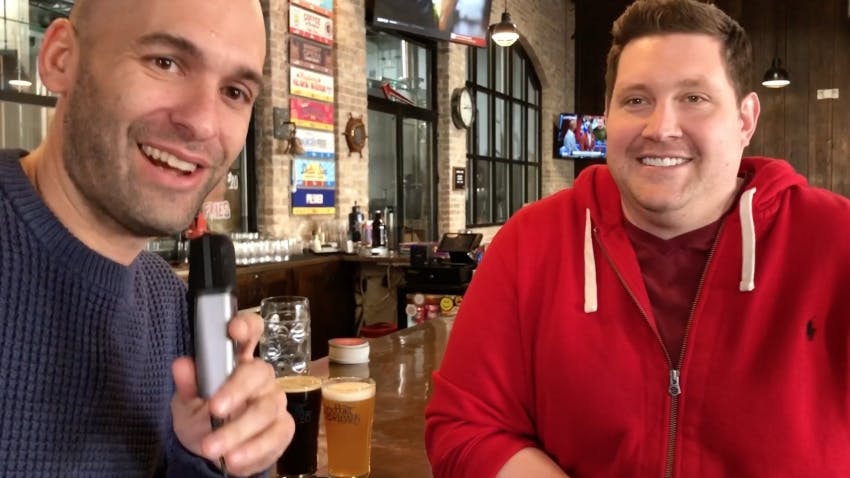 -We chatted with Zach Strief at Port Orleans Brewing Company about the Tropical Gleason IPA releasing tomorrow and what the beer means to the community and Team Gleason (1:45)

– Hey, hey, hey, what’s up y’all this is Matt co-owner of NOLA Brew bus. VinePair, a popular blog on wine, spirits and beer ranked New Orleans as a top 10 destination craft beer city in the world. Let’s see what the hell’s going on.

-We’re back at Urban South, we’ve got this new double IPA Finial. This is not the first time they released this, this is part of the Architect series, and one of these new beers comes out every three months a different one.

This one is the double IPA, super delicious, super dank, very much a classic hazy IPA, a lot of citrus flavors, very strong aroma on the front end, so delicious. Definitely a hyped up version of this recipe from last time they brewed it last year. You’re gonna wan- you need to get this four pack, it’s so good. El Chocolate Picante, which is a spicy chocolate stout. And, let’s see how this one taste. Wow, this is very good, it’s got lots of chocolate up front. You get a subtle spice on the back end. It’s not an overpowering spice though, it’s enough heat just to make you want to drink another sip.

Alright, we’ve made it to Port Orleans brewing, here to try out the Gleason Tropical IPA. Gleason IPA is one of my favorites, it’s a 5.5% session IPA. You could drink it all day, goes down super smooth, but has all the same characteristics of a hazy IPA that most people enjoy. So, let’s go check it out. Alright, what’s up y’all, we’re here with Zach Strief, managing partner of Port Orleans and they’ve got two- three new beers coming out, two stouts and the new Tropical Gleason IPA, we love the Gleason IPA, our customers love it. So Zach, tell us a little about the tropical version of it.

– Well, we talked about, you know, with the playoffs going on and how big the Saints are right now to do something to kind of reinforce the Gleason brand, something that- a beer we’re really proud of. And so, we kind of sat around and talked about you know, what flavors do we want to get out of it or maybe prop up in the beer, and Gleason already had a lot of tropical notes in it, but we figured let’s try to draw out some of the pineapple and some of the guava that you get in there. So we reinforced it, changed up a little bit of hops and we also put some fruit juice in it to just kinda build up that beer around those flavors and we’re happy with how it came out.

– Very nice, let’s take a taste of it. I love the Gleason IPA, it’s one of my favorite session IPAs, comes in at 5.5%, so for me it’s like the perfect all day drinking IPA, I can’t drink those doubles all day, I’d be too hung over the next day. Wow, it’s so good, delicious, comes in six packs, very affordable, about $9.99 a six pack, Zach?

– Yeah, $9.99 and then the great thing about all the Gleason IPAs is that a portion of all proceeds from the Gleason IPA go back to team Gleason to help them you know, do the work that they do, enriching the lives of people that are inflicted with ALS and obviously the work that they do is incredible and everyone around here knows about it and that’s all around the city, not just in cans, but it’s in the brewery, anytime a restaurant buys a keg, anytime you’re buying a Gleason IPA, you’re supporting team Gleason.

– Very nice, Steve Gleason, a hero in New Orleans. Tropical Gleason, definitely a home run. Come get it, this Saturday, at Port Orleans. Alright, here we are, this is the brand new Stout, this is the- pilot version was the Magically Delicious Dessert Stout. And this beer is made with vanilla, little lactose, some cocoa nibs and macaroons from Sucre. So good.

– It taste very smooth, it goes down very easy, it definitely has a huge vanilla, cocoa, and cinnamon taste to it. Personally it’s got a nice buttery finish at the end of it.

– Over here with the new Small Batch IPA, Forklift Joyride. Holy cow, this guava is like, right in your face. It’s so good. It’s not boozy at all either, usually, you know, double IPA can come in hot, this thing’s ready to drink right now. The Forklift IPA, it’s so good.