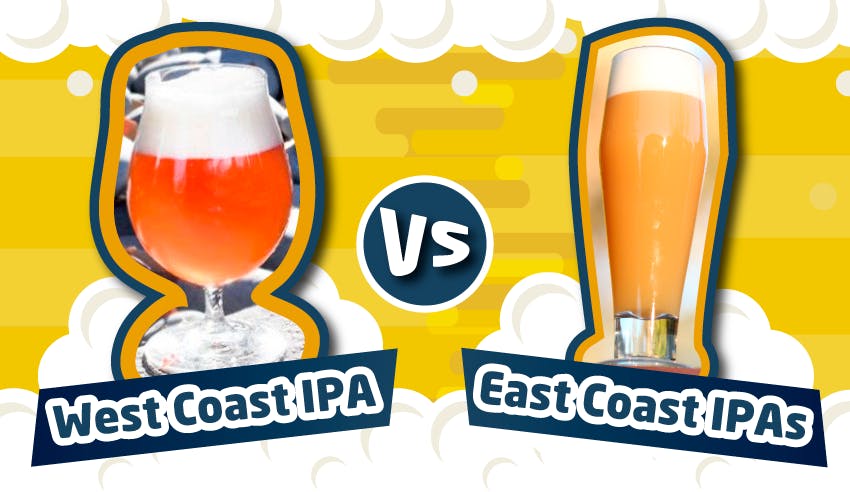 Check out the full video here:

– Everything, everything is so different about those two beers. Wildly different. Water chemistry, style of hops, when the hops go in, everything.

– [Interviewer] You like West Coast or East Coast better?

– I respect both of the styles equally. And that’s true.

– [Narrator] What’s the difference between an East Coast and a West Coast IPA? IPAs are the number one selling category of craft beer, accounting for more than 25% of all craft beer sales.

If you’ve been a fan of craft beer for a while, you know about the long-debated West Coast versus East Coast IPA battle.

However, many of our customers tell us they don’t even like IPAs. Then after three hours on our tour, they end up loving the new flavor they just tried.

There’s a massive difference in flavor between each of them, with each head brewer offering a new, distinct perspective. So don’t give up on IPAs just yet, and let’s dive in and see what the folks love.

– So, what is the deal with all this haze-craze? East Coast, West Coast, what coast, East Coast or West Coast IPAs.

– All right, East Coast versus West Coast. West Coast is the old school IPA, very much a hop profile, lots of hop bitterness involved. The hops are really meant to shine. It’s meant for, really just to make all those hops to burn those oils and release the bitterness.

– Yeah man, it’s just, it’s got everything to do with the bitterness.

– West Coast IPA, it’s old school. I like the bitter hops there.

– East Coast, it’s more balanced, the malts add more, a little bit of flavor towards sweetness. The hops actually get put in in the back half of the boil, which allows for the essential oils to really create those citrusy flavor.

– [Interviewer] We got Grant with Brieux Carre here. Grant, what is your opinion of East Coast versus West Coast IPAs?

– They both kinda have their positives. I tend to like a bit of a blend between the two.

– Feel like the East Coast, we’re definitely on this trend right now that’s blowing up all over the place. So crazy that you learn, it’s like the spectrum of hops. So you got everything that’s from like tree sap to almost like pot to coconut, pineapple, like these very tropical flavors.

– So we got the founder of NOLA Brew Bus right here behind me to say what his favorite West Coast or East Coast beer it is.

– This is a East Coast IPA. Trust me, it’s worth the parking. Ah, I love the citrus and stuff with the pineapple.

– [Narrator] All right guys, thanks for tuning in to Brew Bus Shenanigans, Episode 26. Hope you learned a little bit about East Coast versus West Coast IPAs. Until next time, cheers.