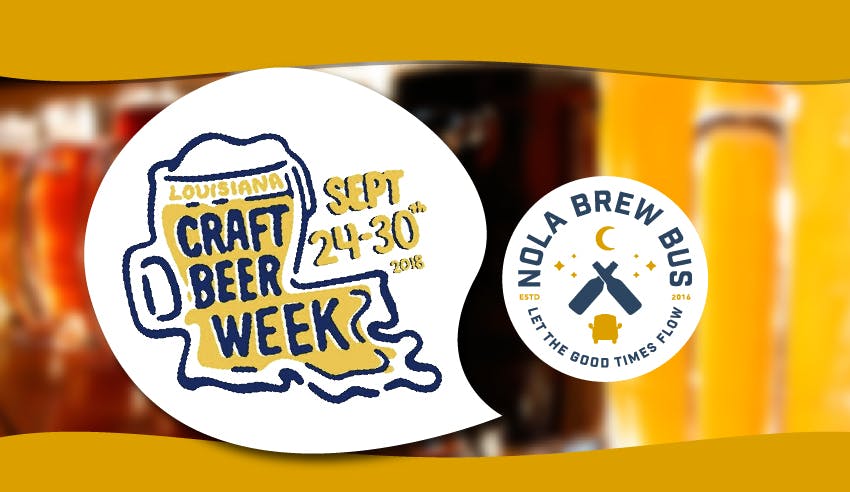 Show Me a Better Beer Scene than This Weekend in NOLA

Louisiana Craft Beer Week always brings the heat when it comes to beer events, but 2018 has really outdone itself. There are some unbelievable brews being released this week.

After compiling the list of information, seeing the full beer lists, the music lineup, and the food being served, it really is amazing just how far the Big Easy Beer Scene has come in such a short amount of time. A huge round of applause to all our local breweries all putting out their own unique spin to our beer culture.

On Saturday, September 29th, our tour will be headed to Urban South, NOLA & Port Orleans where up to 5 of these beers can be poured for yourself. Book Online below:

Mid-City’s only neighborhood brewery celebrates their three-anniversary in style for two days of beer, food, music & fun. Here’s what the lineup looks like from Second Line’s Facebook event.

We are excited about the Sweet Reverence Imperial Stout. Clocking in at 9.8% ABV, this is undoubtedly one of the best stouts brewed in the Big Easy. Be sure to bring the kids & dogs for this family-friendly event.

If you haven’t tried the food from The Stokehold conveniently located in Port Orleans Brewing, then you are missing out. Don’t fret, this weekend’s Brunch & Brews is your opportunity to taste this fine lineup:

Alongside food will be their newest Fall Seasonal, Coffee Break, and some beer-mosas!

From the Port Orleans Facebook event, “This delicious coffee stout is a collaboration with our friends down the road, French Truck Coffee. If you love coffee, you probably love French TrucK which ultimately means you love Coffee Break.

Also, while there, try out the new Marigny Opera House Stout on Nitro. It’s creamy, smooth and rich in flavor–everything you want from a Nitro Brew.

We talked about the awesome IPAs NOLA has been releasing in 2018 in our of our earlier blogs:

But, the good folks over at NOLA pulled out all the stops for the least IIPA release, Runaway Gem.

The newest IPA focuses on a fairly new hop called “Idaho GEM” which is tropical, featuring an aroma of pineapple, cherry, candied fruit. NOLA is one of the first breweries in the area to use this hop, so we are excited to try it.

This hop comes from the same growers of the Idaho 7 hop which was a primary hop in NOLA’s Spud Heavy IIPA release earlier this year.

In addition to the newest double, Runaway Gem,  they are re-releasing several variant small batch IPAs as well:

The full taplist can be seen on their Facebook event: Pour Decisions 2018

It wouldn’t be a true NOLA small batch IPA party without some incredible music. Also pulled from the Facebook event:

“We are closing out Louisiana Craft Beer Week with one of our most popular events FOR FREE!
FEATURING the Iko Allstars and Phoush -A tribute to Phish, with special guests, Michael Fouquier, Blake Quick, Drew Meez on the Keys, and Devin Kerrigan!”

Lastly, since NOLA is known to make some of the finest sours in America, it would be remiss not to untap a few of those aging kegs from the Funk Series room. Here are the 7 sours on tap:

I can’t wait to try that Tequila Aged Gose as Urban South has become the Gose kings of the South this summer.

Live music starts at 11:30 am with Bogue Chitto and continues with Hallelujah Hat Rack from 3:00 pm to 7 pm. Food trucks will be there all day. In addition, there will be a bounce house to keep the kiddos entertained.

Of course, it wouldn’t be an Urban South event without a great new IPA release. This time, it’s Tropical Reflections IPA–hopped with Denali, Azacca, and El Dorado and finished with Mango Puree and a touch of apricot and peach.

Urban South is also releasing three Berliner Weisse beers which will surely be a hit if tastes as good as their other sour based beers.

Avenue Pub is at it again with another year of Zwanze Day. Our beer scene has come a long way as just a few years ago, this used to be the only beer event in the city on this weekend.

It’s happening again! We’ve been selected as one of the craft beer bars in the world to pour Cantillon’s very special lambic, brewed specifically for one day of the year and tapped at the same time around the globe. We are particularly excited for this year’s batch and cannot wait to share it with you.

That’s it for 2018 Louisiana American Craft Beer Week. Between these 5 events, be sure to stay hydrated and find a designated driver!

What to Expect on a NOLA Brew Bus Tour