Top 10 Miel Brewery Beers from the Past Year 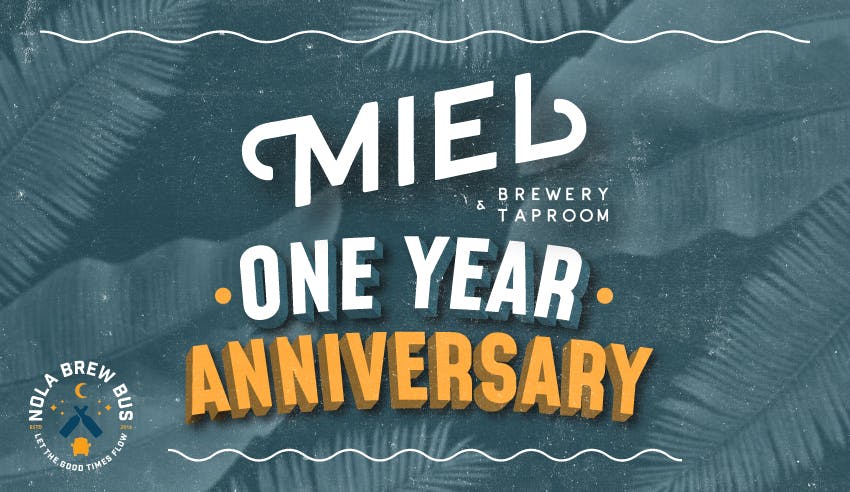 Miel Brewery & Taproom opened with much anticipation in October of 2018.

Conveniently located just one block from NOLA Brewing, excited Irish Channel residents were quick to adopt the brewery as a local favorite.

Co-Owners Janice & Alex transformed the former warehouse into a beautiful quaint space to relax while sipping some world-class beverages.

Since opening, Janice has completely re-designed the interior while head brewer Alex uses his Cicerone Certified skills to continue to push the envelope in making delicious brews with wild, funky recipes.

Alex has brewed over 30 beers in just 1 year. Each brew offering a distinct perspective.

This Saturday, October 12, 2019, come celebrate one year of excellence at Miel Brewery & Taproom. You can RSVP or share the event on Facebook here.

If you have not been to Miel yet, you are definitely missing out. Without further ado, here’s a rewind of our top 10 favorite Miel Brewery craft beers.

Candy beer uniquely became a Miel Brewery niche during the 2018 Saints football season. For the playoffs, AK41 was created and a few more were manifested since then. Here’s our favorites:

Alvin Kamara, star Saints football player, is known for his love of the candy Airhead Extremes.

Why not make a light Cream Ale and throw a bunch of delicious candy in the fermentation tanks?

The first batch actually added 2% ABV to the content as the yeast feasted on those candy sugars. The second batch was more subtle yet just as delicious.

This beer is not overly sweet as one may incorrectly assume–it’s perfect on the palate with a backend hint of candy.

Another Cream Ale with candy in the fermentation tanks. This time, 15 pounds of Watermelon Sour Jack candies were used in the fermenters.

Consider the Blue Rasberry Candy Straws from the 90s. Probably the candy that contributed to all my childhood cavities. Who would have thunk how delicious it would be in a brew?

Probably a Brew Bus favorite of the year. this American Cream Ale was nostalgic yet delicious.

All these cream ales added an extra layer of depth from a generally boring beer. We can’t wait for the next candy beer to try!

Plants have consciousness just as humans do, so let’s celebrate life with America’s favorite beer category: the IPA

The Hazy/New England/East Coast IPA craze kicked off in 2015, became an official category in 2017, and now has taken over as the #1 selling category of craft beer.

If you can make a great Haze Bro, then you will bring people to the front door. Miel put out some outstanding ones right out the gate.

“Monstera” is a New England Triple IPA packed with 7lbs per barrel of Azacca, Idaho 7, and Simcoe hops.

This juicy, hazy IPA clocks in at 9% ABV and was brewed with oatmeal and lactose to balance the pineapple, mango, and orange juice hop flavors.

“These tropical flavors are what inspired us to kick off our tropical plant IPA series. Monstera deliciosa is a species of flowering plant that is native to tropical forests of Honduras, where co-owner, Janice, is from.”

This is everything you want in a big hazy IPA. It’s bold, beautiful, and goes down smooth despite the high gravity content.

Milkshake IPAs with Lactose have also exploded in growth. Sugar from the malted barley is the key component in beer as the yeast feed off it to create alcohol.

Since the sugar Lactose is unfermentable in brewery yeast, the final product with lactose added results in a bigger mouthfeel and more sweetness.

However, Miel creatively replaced lactose by using marshmallows instead. Now, even the lactose intolerant can sip on this sud. We love the vanilla notes in this IPA and thought the recipe design was also very creative.

Although Birds of Paradise clocked in at 10.5% ABV, it still went down dangerously smooth. It was dry-hopped with 8.5 pounds of hops per barrel!

This Plant Series IPA perfectly showcases the plant life so well done at the brewery.

Sour beers use bacteria instead of yeast to ferment. The bacteria, usually Lactobacillus or Brettanomyces, lowers the pH of the beer thus creating a beautiful tartness. Miel created three amazing ones.

Gose are great introductory beers to the true aggressive sours that are created using the bacteria Brettanomyces in Barrels. Gose beers, on the other hand, add the bacteria Lactobacillus in the mash tun during The Wort (malted barley + water) creation process.

The New Orleans brewery scene made some killer gose beers. But, this particular Gose was one of my favorites.

It’s made with Hibiscus flower to give it the bright color along with cinnamon bark and Pink Himalayan sea salt. The spices of the cinnamon bark complement the sourness of the Gose really well.

We are super excited to try the wine barrel-aged version of this beer, Chateau de Jamaica during the 1-year Anniversary party.

From the Miel Brewery untappd page, Rubus Cube is “A kettle sour blended with raspberry puree, Meyer lemons and vanilla. This fruited sour is a delicious balance of raspberries, tart lemon and creamy vanilla. Sweet like a dessert but crushable to drink outside”

We could not agree more, and our customers were sad to see this one leave the taplist.

This Brut Sour was a play off the Brut IPA. Alex used champagne enzymes to give it an effervescent mouthfeel like Prosecco. This, coupled with pink guave and cherries created a dry, tropical finish. The white wine of beer if you will.

Our last Miel favorite and certainly not least is part of the new Porter series.

For the anniversary party, 5 porters will be on tap including the 2nd batch of Good Grief!

A delicious peanut butter imperial porter that clocks in at 8% ABV. Another high gravity beer that drinks dangerously smooth.

Brew Bus customers receive 5 tokens to redeem for specific beers on the menu, but we always recommend drinking a few light ones as 5 Good Griefs plus a night on Bourbon St. may make for an extra special morning.

In addition to Good Grief, here are the other 4 brews plus the full taplist at Miel’s One Year Anniversary Party!

From Co-Owners Janice and Alex:

Our first trip around the sun went by too fast! The support we have received this past year has been incredibly humbling for us as we continue on this wild leap of faith. The Miel team can’t thank you enough for your love and support! We’re so excited to celebrate this milestone with you.

We are always learning new ways to keep beer fun and are looking forward to the next year of hopped-up IPAs, barrel-aged sour beers, and collabs with our friends! We also have some exciting taproom additions coming that we can’t wait for. The best is yet to come.

Congratulations again to Miel Brewery, and we will see y’all out there on Saturday.