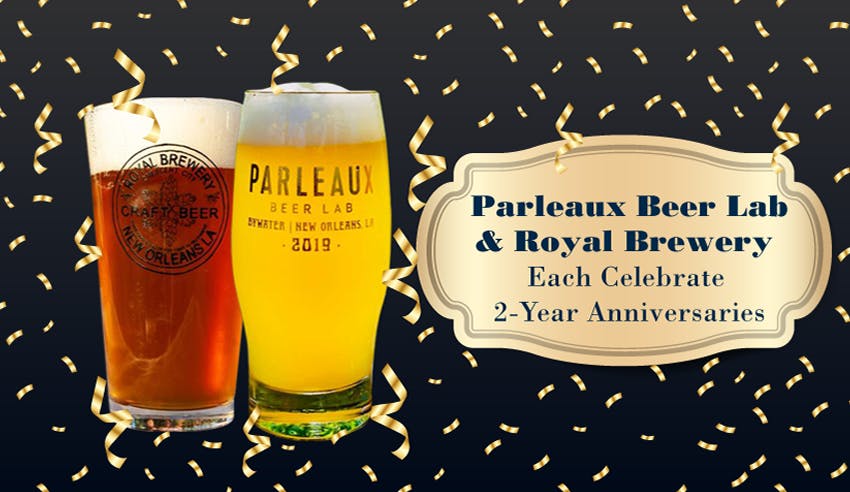 Both businesses, 2 years later, are still the only breweries in each prospective neighborhood.

You can expect a great experience at both parties, each one offering a different perspective.

Parleaux Beer Lab is throwing their party on Saturday, June 1, 2019 from 11am to 10pm with some amazing funky brews, live music, & food.

You can purchase VIP tickets in advance which we just did. Your ticket purchases include a “Keep on Trustin'” Parleaux t-shirt, and the above 2019 anniversary beer glass.

All new 7 beers will be on draft and possibly a Double Dry Hopped version of the popular Foggy Glasses IPA.

Meanwhile, Royal Brewery celebrated in style last weekend during their Big Easy Shakedown and the Take Paws Fundraiser which featured 6 bands at the Brewery. Royal consistently brings live music to the brewery on weekends.

This Sunday will be more lowkey while everyone enjoys $2.00 pints. That’s right, $2.00 per pint! Move over Ms. Mae’s and head on over to Royal Brewery this Sunday.

In case you missed it earlier this year, we stopped by the brewery and chatted with Owners Raymond and Mandy discuss all things Royal including Dixie Beer progress and what it means for New Orleans East. Check it out below:

And CHEERS to another great weekend of beer in the Big Easy!

You May Also Enjoy!