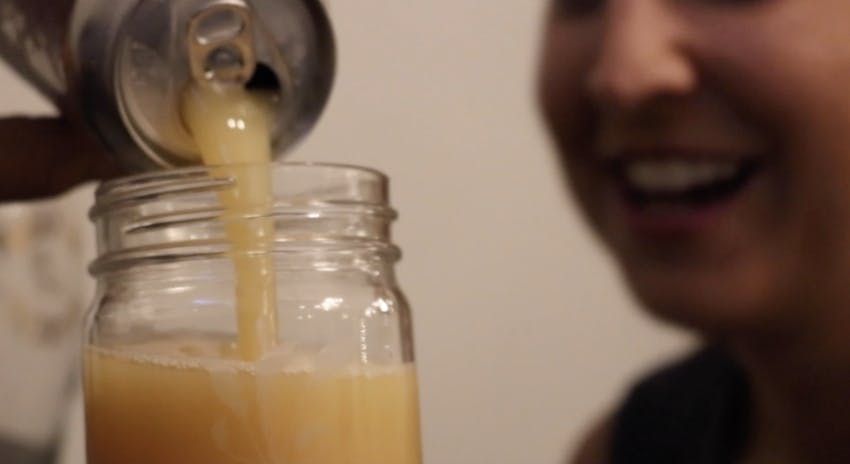 See how we brewed the beer and the process behind it in episode 27 of Brew Bus Shenanigans! This beer releases July 5th at the source only!

– And we’ve been giving brewery tours for three years now and this is actually our first beer we’ve brewed, so we’re super excited to have this opportunity with Urban South. We love IPAs, we’re hopheads, add more hops. So let’s go check it out.

– Brand new sometimes the East Coast IPAs take two or three weeks to cool down a little bit. It’s not comin’ in hot or green at all, to me, it’s ready to drink right now. It think it’ll be even better in two weeks.

– Yeah it fermented really nice, tons of juice. No complaints there.

– This is what you want in a hazy IPA right here, so let’s go see how we made this thing, all right?

– First part about making beer, the four ingredients are water, hops, barley, and yeast. The first step of the process is this big machine right here, this is where they store all their base malt. We just crushed the grain to help extract that sugar.

Next part of the process is we’re gonna add about 1.3 gallons of water for every pound of grain we put in the kettle.

If you guys have ever made oatmeal before, you have oatmeal, you add a little hot water to it, or milk, whatever your preference is, it’s real thick. Same thing with the mash tun.

When we’re adding that one pound of grain for every 1.3 gallons of water, when it’s in the mash tun, it’s really thick. The next step of the process is called mashing, creating the wort. We’re essentially taking that really thick grain and turning it into a liquid base.

We just finished separating the wort from the grain and now we’re getting rid of all that spent grain, and that’s gonna be going straight to farmers to feed their cattle. So we just transferred the beer from the lauter tun into the hop kettle, now it’s boiling at about 210 degrees.

If you come look in this, this is the wort right here. The wort is now boiling and we’re gonna be adding the hops.

Currently filling up at about eight gallons a minute, this is a six barrel batch, there’s 31 gallons per barrel, lookin’ at roughly a little less than 200 gallons that’s goin’ into the tank. Now it’s time for us to transfer from the hops kettle to the whirlpool.

We gotta cool the beer down from about 210 to about 170, roughly. So once we get the hops in, next step, fermentation, fermentation.

– Yeah, take that fermentation, the bags of blood orange puree.

– 42 pounds per box, six boxes, climbing up a ladder. Not great for the back.

– Think its ready. This thing is so beautiful. My man, killed it.

– Only seven barrels, so less than 200 gallons.